Public access to the Parco del Foro Italico is located at  the entrance on Lungotevere Maresciallo Cadorna  at the corner of Via Canevaro, between the covered swimming pool and the Stadio del Nuoto, and at the entrance on Viale delle Olimpiadi 60 (Ponte della Musica).

Is located at the Welcome Area on Viale delle Olimpiadi (South Entrance).

BNL ATMs are available inside the Foro Italico area,  at the agency’s Exhibition Area and the dedicated athletes’ area.

Three main “Food Areas” have been set up, refreshment sites with cafès and fast food — two near the Centre Court and one at the Grand Stand Arena.

The new entertainment venue is located at the swimming pool area of the Circolo del Foro Italico facing the Centre Court, this is a paid admission area.

The vast space along the Viale delle Olimpiadi is reserved for commercial booths. There are about 100 tents set up in the area.

Parking near the facility

To reach the facility in your private car without the necessary permit, the closest parking facility is at Piazzale del Foro Italico, near the Stadio Olimpico and the Stadio dei Marmi. Alternatively, you can use one of the following parking facilities—Piazza Mancini, Piazzale Maresciallo Giardino, or Piazzale Clodio. You can also park in the zones marked with blue stripes on the streets adjacent to the facility. Hourly parking fees are € 1.00 from 8 a.m. to 7 p.m. The Ponte della Musica also allows easy access to the south entrance, using parking on Piazza Gentile da Fabriano and Lungotevere Flaminio.

The closest reference point for those wishing to leave their cars at home to reach the Parco del Foro Italico with public transportation is the Piazza Mancini terminus—simply cross Ponte Duca D’Aosta or Ponte della Musica to find yourself at one of the two facility entrances.

If you decide to take the metro, the closest stations on the A line are “Ottaviano” and “Flaminio.” The transfer station between the A and B lines is “Termini.” At the “Ottaviano” station exit, you can take bus #32 and get off at the Lungotevere Maresciallo Cadorna stop. On the other hand, if you arrive at the “Flaminio” metro stop, the best bet is to take tram #2 all the way to the Piazza Mancini terminus.

Connections “to” and “from” the airport and station

Those wishing to reach the Foro Italico from the Fiumicino Airport (“Leonardo da Vinci”) and vice versa, instead of taking a taxi, can take the metro train (treno metropolitano) all the way to the “Roma Tiburtina” station or the direct train to “Stazione Termini.” Transit time for the metro train is 45 minutes and the stops for those arriving from Fiumicino are as follows— “Ponte Galeria”, “Muratella”, “Magliana”, “Villa Bonelli”, “Trastevere”, “Ostiense”, “Tuscolana”. The non-stop direct train for “Roma Termini” has a transit time of 30 minutes and makes no stops along the way.

For reservations, there is a Taxi station on Via Roberto Morra di Lavriano.

Two first aid stations will be provided, one adjacent to the Grand Stand Arena, on the Viale delle Olimpiadi side, the other at Center Court.

The Foro Italico has 15 clay courts—the Centre Court, the Grand Stand Arena, the Nicola Pietrangeli Stadium, and 12 other courts, of which 3 were just completed for the 2014 event.

Seating capacity of the courts 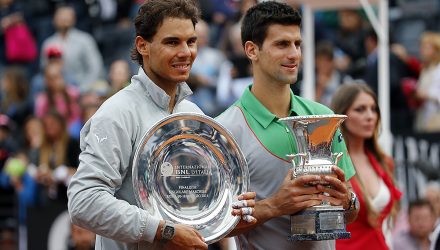 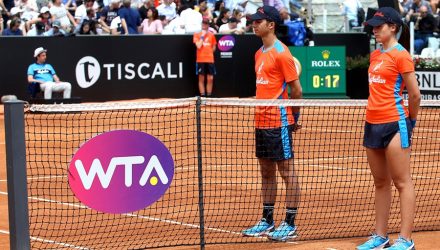 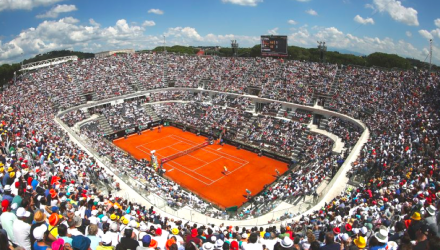